The AAU-CRENAU laboratory at ENSA Nantes offers a 4 to 6 month internship to be carried out in 2020:

« From 360-video to isovist fields – visual analysis of urban environments ».

Isovists and isovist fields are conceptual tools used to carry out morphological analyses of architectural and urban spaces. They were developed and theorised in 1979 by M. L. Benedikt1.

An isovist determines the available space in a direct (visible) line from a given position in an architectural or urban environment. As the visibility of the urban space is part of the urban design qualities identified by urban planners2, isovists are a particularly relevant tool to evaluate the quality of an urban space.

This internship project aims to rebuild an isovist field based on a 360-video captured along an urban route. Based on the video, and for each image, the point is to build a 3D map of the surrounding space using SfM (Structure from Motion) or SLAM (Simultaneous Localization and Mapping) algorithms from the state of the art. The collection of 3D maps will then allow to extract the rest of the 2D and 3D isovists along the path.

To apply this reconstruction, the aim will be to compare, as a given set of dots from the route, the 2D and 3D isovists from the video capture and the corresponding synthetic isovists that were generated with a 3D digital model of the city. The implementation will enable an interpretation of the variation between perceived space and simulated space during the journey.

This master’s internship could lead to a PhD thesis, whose goal would be to validate the potential uses of quality indicators regarding on-site urban design by professionals, using the situated analysis approach3.

Fig. 1. (Left) In the horizontal plane, the isovist is the set of dots that are seen from a given position (in this case, from the black dot) ; (Right) The 1.6 km pedestrian route is sampled every 20m. An isovist is then calculated for each sample. The corresponding isovist field as a plane representation. The darker the colour, the more visible the corresponding segment in the urban space is along the path.

15% of the Social Security hourly ceiling, depending on attendance time 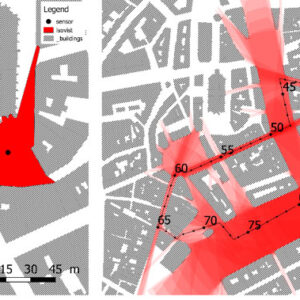